The right breeder for “my” Catahoula! 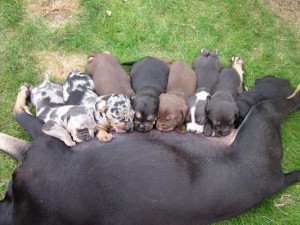 Information for future Catahoula owners, who are looking for  a suitable breeder:

Checklist for choosing a breeder:

To be sure that you have found a good and reliable breeder for your future Catahoula dog, you have to consider the following facts for your choice:

First of all, you should get information about the parents from the breeder.

The Louisiana Catahoula Leopard Dog is a robust and still healthy breed. Nevertheless, there are some facts to be considered.

Firstly, both parents should be healthy. Evaluation of hips (hip dysplasia) and other health examinations, also BAER tests if necessary, are to be asked for.

Most of the Catahoulas are so-called Merle Gene carrier. When associated with a high part of white colour in the dog fur, this gene could lead to unilateral or bilateral deafness.

Breeder should be informed well on problems concerning merle x merle breeding and its consequences.

Unfortunately, it occurs from time to time, that puppies are purchased by so-called “breeders” and are then sold profitably. The original breeder is not informed in most of the cases. If you have doubts, please make sure that the puppies have been born and raised in the breeder’s custody.

The age of the dam plays an important role in breeding. The female should not be younger than two years when whelp for the first time. Females which are too young are often overcharged, which has negative impacts on the puppies and their development. Dogs from these kindles are often nervous and are unable to find peace, as their first example in life is their mother.

The time before birth is also very important. If the female has too much stress due to inconvenient life conditions, stress hormones in her blood circulation have negative impact on the unborn puppies. If she has too much stress, she cannot raise her puppies in a relaxed and sovereign way.

This affects strongly the stress system of the puppies and may lead to problems in the course of their development. Strong anxiety and  unsureness may be typical symp-toms.

A professional and good breeder may create a quiet retreat area where she can raise her puppies in the first weeks of life.

It is very important that the dam can take care of her offspring without any unnecessary disturbances from outside in the first 4 weeks.

After this period of time, an early socialization with the environment, noises, humans, other animals (if in house) and other dogs should take place.

If the breeder has more than one breeds at the same time, possibly even of different strains, one probably has to assume that he “produces” puppies, and a responsible breed-ing is not feasible any more. A good breeder will also be very interested in what you intend to do with “his” Catahoula puppy.

He wants get to know you, and he is experienced with the strain/breed (Rasse), and he knows his puppies and their personalities very well, so that he can advise you in choosing the right dog. He may also be able to tell you all details about the characters of the parents.

We strongly advise against internet purchases!

Breeder within the EALC