The Louisiana Catahoula Leopard Dog is a dog made for working! 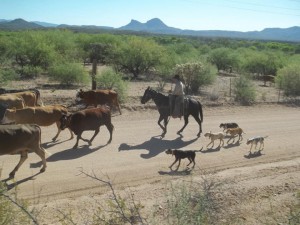 Amber Middaugh´s and Ty Barton´s Catahoulas and Black-mouth cur cowdogs from Arizona are working on cattles.

“Tell a Catahoula what he is supposed to do and he will go ahead and do it, no matter what it is.” – Anonymous. Some Catahoula owners maybe used to this saying. There is truth to it if you take the broad variety of jobs into consideration a Catahoula performs in the US and in parts in Europe. Like all broad statements it is not always true. Before choosing a Louisiana Catahoula, it is essential to research the type of job or utility he is supposed to do, if he will like to do it and that keeps him occupied enough.

Being a working breed does not mean a Catahoula Leopard will be perfect for every job, as like https://www.ealc.info/de/rasse/any other breed, there are limits. This breed does come with the ability to do versatile work as long as you understand the following:

Only if the basic relationship between handler and dog is established well, the dog will be able to fulfill and show his qualities. At that point, working with your Catahoula is a fun filled adventure. (By the way, this is true for all working breeds.)

The expectations for a successful working relationship with a Catahoula is:

• Being calm, relaxed and stable

• Leadership qualities of the handler 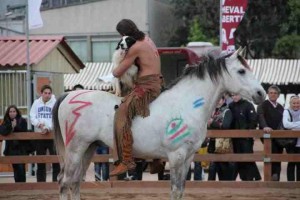 Serenity, sovereignty, trust and obedience, make the quality of the bond between dog and handler. 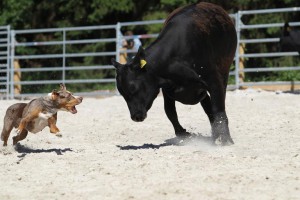 Red Leopard Catahoula Airin Besavej is working at cattle. Catahoulas need to be able to prevail against the often rugged cattle, otherwise the work will not succeed. This requires courage and a certain hardness.

Let’s talk briefly about the genetic traits and the goals of breeding to understand why the Catahoula is suitable in doing excellent work in many areas but not so much in others. The Catahoula is a versatile working breed and continued to be bred by experienced US breeders mainly to “maintain the working drive”. He is not meant to be only a show dog!

One of his main jobs is to drive cattle that is lost back to the herd, herding them together and to separate single animals or groups.

Catahoula Cataloochee´s Ari Kara in training for Search and Rescue

Other typical areas where Catahoulas work are tracking and hunting of wilde game like boars, holding and barking until the hunter gets to the scene, treeing and independent guarding of the farms. Judged upon these necessary abilities, dogs were bred and selected over generations. The Catahoula can, want and has to work independent. It is used to making decisions on its own. This means tracking, all sorts of nose work and hunting are his passion. 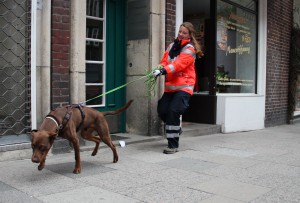 Catahoula male Ayman is trained as a Mantrailer in a Search and Rescue unit and does his job with a lot of ambition and passion.

In the US and in Europe, he is highly recognized in Search and Rescue Dog Work (SAR dog) in trailing, field search, water search and cadaver search. His nose is excellent.

Many dog training facilities in Germany, Austria and other European countries offer seminars in air-scent work such as traling and so on.

A few remarks about other types activities for the Catahoula: 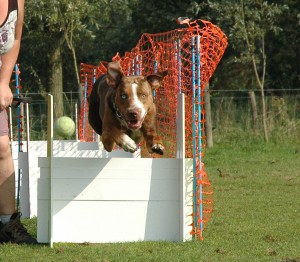 Agility of course is not part of the original work for a Catahoula and is usually not his passion! This dog sport doesn’t require independent working and decision making. But in particular the lighter and more agile built lines among Catahoulas have shown good results so far. I cannot judge at this point how those relatively young dogs will develop over time and have yet to hear about the experience of their handlers. It is less likely that the Catahoula will join the higher ranks in competitions. There are other more relevant breeds for agility. We will always find single cases and exceptions!

Catahoulas that participate in agility should also have a job that fulfills their need to work independently. Best would be some sort of nose work. 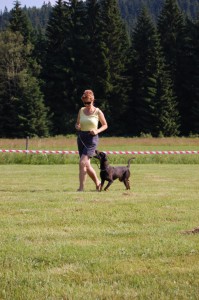 In obedience, the Catahoula usually can be found further down the line following more appropriate breeds for that sport. Obedience is not his thing.

Baseline obedience for daily needs and for passing the canine good citizenship test is possible with every Catahoula.

The Catahoula for Schutzhund Sport (IPO)?

The aptitude of the Catahoula with regards to Schutzhund Sport can be debated.

Even without the training in Schutzhund, the Catahoula has a significant and natural desire to protect his pack without doubt and in an impressive fashion. 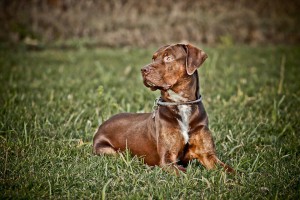 The Catahoula shows great determination to carry out its INDEPENDENT decisions – no good conditions for the protection dog training!

Catahoulas have the capacity to make decisions on their own which is important for their work. In Schutzhund sport this can become dangerous, particularly with training that is not appropriate. Also the ability for absolute and unconditional obedience does not fully exist in a Catahoula but is necessary in critical situations. Other breeds have a better predisposition for that type of work. The Catahoula has the reputation of being too loose.

In Europe, as in the USA, Catahoulas are used as Schutzhund dogs. The VPG, “Vielseitigkeitsprüfung für Gebrauchshunde”, called SchH until 2011; entails not only Protection but also Tracking and Obedience work. The Catahoula is a recent introduction into Europe and it remains to be seen what experiences are made over the longer term with respect to their ability/suitability in Schutzhund work.

Especially given that the Catahoulas being introduced to this line of work are still young, it is unknown how they will respond once they mature and respond as grown dogs. Even in the USA there are not that many Catahoulas that have completed all levels of training.

Importantly, the Catahoula has a „soft bite”; meaning that they will bite and release, rather than lock on and hold their target. A trait which is especially desired for Cattle herding and other intrinsic uses the Catahoula has. In these functions the Catahoula must occasionally command the respect or distract by biting and releasing the animal to successfully execute his work. It may be possible to teach a Catahoula to hard bite, however, why choose a breed to do this when they instinctively bite soft, are other breeds which hard bite not better suited? The soft bite is a trait that was and remains a desirable trait of the Catahoula.

Also as a therapy dog the Catahoula is sometimes requested. His suitability for this job is  limited. The Louisiana Catahoula breed is typically reserved with strangers. It can be, depending on the personality of the dog, well-petted by strangers, but also often shows clearly his aversion to “be touched” by strange persons. 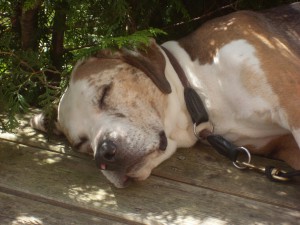 The Catahoula is a working breed. But that does not mean that he needs to work excessively every day. It is a tough and persisting working breed, but days of rest and time out are important too. He needs to be allowed to simply be a dog. Long walks, discovery tours, extended sniffing or a lazy day lying in the sun is important for a Catahoula. In particular puppies and adolescent dogs of this breed need to be told to have some rest. A kennel is a useful resource in that matter. This is the place where the dog can retreat to and is forced to get some rest. Catahoulas that do not learn how to relax at a young age can become restless and nervous companions that are lacking an important trait: balance.