Activity and work in various stages of Catahoula’s life

The Louisiana Catahoula Leopard Dog is a working dog. Ranchers in the southern states of the USA bred this breed specifically to hunt, primarily boar and raccoons, to herd cattle, and to guard a farm as well as for other roles. Catahoula is a multifaceted breed. Breeding selection was based and indeed it is still driven by working needs of breeders. For this reason, the working traits of this breed are still present in today studs. The Catahoula wants and needs to work and not just physically. However, one must be aware of  requirements of each dog, whose needs are dependent upon its age.

As any other dog the Catahoula needs to rest for twelve to sixteen hours a day. Dogs that get to rest less become nervous and agitated. This often leads to an owner’s misconception that the dog requires more exercise. This is dangerous as the stress hormone levels rise in the bloodstream and the dog can become aggressive or loose concentration. The dogs with increased stress hormones cannot interact and/or learn from their environment. Therefore the rest is relative to the age important.

The Catahoula as a pup: 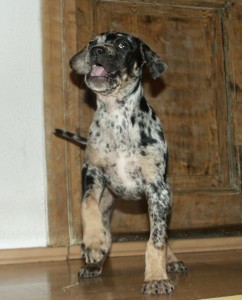 Pups usually enter their new home at eight weeks of age. At this point in a pup’s life, it is primarily important to discover their new environment and home. In regards to walking a dog, the rule of thumb is five minutes per a month of age; too much or too little can lead to behavioral/medical issues.

In this stage of development, it is important to socialize a dog. Generally, the Catahoula tends to be wary of strangers and in certain situations it can become cautious and attentive in a defensive manner. It is critical for the pup to be subjected to positive socialization during this stage. The pup should be exposed to a variety of other breeds in dog school groups. The pup should be also introduced to various people.

It is important to note that these stimuli should be imposed moderately. If the pup is exposed to an inordinate amount of stimuli, it can have an unnerving effect. The pup should be able to cope with these stimuli and it requires time and rest. If this space and freedom is not given there is the risk that the pup grows to become too nervous and exited.

The cardio, skeletal, and muscular systems must be also worked out moderately. If the pup is exposed too much to physical effort it can lead to permanent damage later in life. Playing with other pups and dogs is seen as the most healthy movement. During play with other dogs, the pup is developing mentally as well as physically.

It is suggested that in cases, when the dog cannot come to rest of its own accord, a transport box should be purchased and the dog should be allowed to rest in the box. It also helps training a selfcontrol. 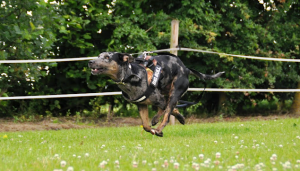 The Catahoula should not be exposed to dog sports, such as agility, carnicross, etc., too early in life. Although Catahoulas have a tremendous working drive, they should not work too hard until they are about twelve months of age. If the Catahoula is subjected to such a workload too early, it can have a negative impact upon his heart and skeletal system.

It is suggested that Catahoulas should be allowed to experience such activities in a playful situation and in moderation. The Catahoula’s temperament, speed, at which they become excited, as well as their pronounced ability to learn at this age, make them suited to such workload. It is suggested that Catahoulas should be trained and allowed to practice from the early age in situations, where concentration is required; in doing so the young dog will be more obedient in exciting situations. 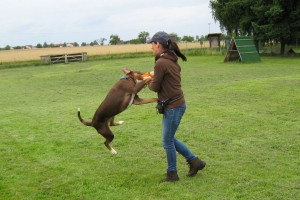 Once the Catahoula is fully grown there are no more limits. Only the exception is that the trainer gradually increases the strength and conditioning of the dog over time and employs a suitable training programme.

Continuing and regular training will result in a healthy and fit dog. It is not desirable to let enter the dog in repeated competitions or working situations without the rest required to recuperate from such an event. Overworking the Catahoula is irresponsible. The Catahoula requires work and exercise but it must be relative to the age and condition of the individual dog. The dogs should not be driven to their limits unless the situation does not allow for a compromise.

The question is then, how do you employ your Catahoula? Movement alone is not enough for them; a grown Catahoula can run forever.

Our suggestion is to work the Catahoula in a manner befitting their natural design. They should receive balanced work, which requires use of both brain and nose, such as search or learning games.

Over and under working dogs

To keep the Catahoula balanced they require movement and activity. Especially in the early phase, the line between under- working and over-working is a thin one.

The following table shows the symptoms of both of these conditions:

As it can be seen, the symptoms are similar. Without looking at the whole situation, it is extremely difficult to say whether the Catahoula is receiving too much or too little work.

Playing is important both for pups and grown Catahoulas. Dogs playing with their owners are much more balanced and are more obedient according to field studies.

It has also a vital function in the pack, playing promotes bonding within the pack. As such, it is part of daily life. It is important to note that playing does not involve a hierarchy; each play partner is allowed to and is subjected to being barreled over and pushed around.

The trainer must be aware of the outcome of playing. If one partner is always winning, then the game can quickly escalate to a conflict. It is important to keep an eye on playing dogs, especially, those that are not a part of each other daily lives, in order to be able to intervene and prevent such escalation.

Playing with a ball can pose a risk. Many trainers note the amount of fun their dogs have with a ball, in particular, when they are chasing it; and now you are throwing it endlessly, believing that you are doing a favor to your dog.

Unfortunately, the effect on such a playful dog can be just the opposite. By chasing (stalking) the ball, the dog releases dopamine. Dopamine is a hormone, which makes you feel good about what you are doing, a kind of chemical reward. So the dogs get a natural high and they are not aware of being physically exhausted. This chemical compound allows the dog to transpire the natural limitations of their conditioning by mobilizing further energy reserves. This makes sense when a wild dog is actually hunting a prey. Unlike the hunt, where the dog is able to dissect and consume the prey and which is followed by a deserved rest, the ball junkie’s hunt never ends and never gets enough. 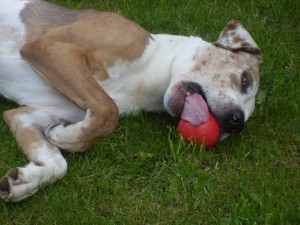 For that guy it is an relaxation ball

The trainer continues throwing the ball and the game spirals out of control. The dog is after the dopamine high and looses interest in other pursuits. The trainer, other dogs, and further training is no longer of interest. Only the ball game is important and eventually, the social skills start degrading.

The path of a Ball Junkie

1. After extensive ball play the dog looses interest in their environment and other dogs.

2. The dog becomes agitated and attempts to convince the trainer to throw the ball. It is typical that the dog places all manner of items at the feet of the trainer.

3. Other dogs are barked at until they are engaged in a chase game, at which point they realize they are serving as a prey substitute.

4. The developing ball junkie reacts quickly to any moving object. Anything that moves simulates a prey.

5. The dog has become addicted. It is possible to recover the dog; however, it requires time and focus.

The working drive of the Catahoula is invigorating, though it is important that the dog receives a balanced plan of movement, work, play, and rest. Those that pay attention to those balanced requirements will be rewarded with a content dog, which relaxes in the downtime and is able to be a relaxed partner for any activity.

2 Responses to Unchallenged and overchallenged Catahoulas